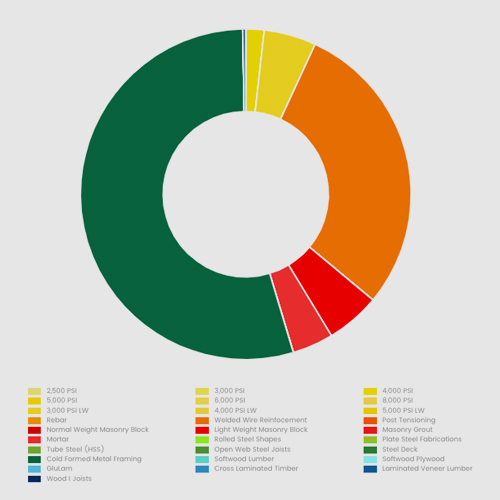 Embodied carbon is the sum of greenhouse gas emissions released associated with raw material extraction, manufacturing, and support transportation for materials production and the emissions associated with the construction, maintenance, renovation, and end of life considerations of buildings and infrastructure. The corresponding greenhouse gas emissions are measured and summed together relative to their impact of one molecule of carbon dioxide and measured as carbon dioxide equivalent (CO2e) with units of kilograms.

The name embodied carbon is synonymous with global warming potential (GWP). One kilogram of carbon dioxide therefore has a GWP of 1 kgCO2e, whereas, for example, one kilogram of methane is approximately 82 kgCO2e. Though other greenhouse gases may be more efficient at trapping heat within the atmosphere at a molecular level their total volume and half-life may be such that they are not considered as potent as carbon dioxide.

CO2e emissions released before the building or infrastructure use begins is sometimes referred to as upfront carbon. Upfront carbon will be responsible for half of the entire carbon footprint of new construction between now and 2050, threatening to consume a large part of our remaining carbon budget.

Embodied carbon is different than embodied energy, which only accounts for the energy use in all life-cycle phases of the built asset regardless of energy source. Some amount of embodied energy may be from renewable sources and would not be considered a source of greenhouse gas. Net embodied carbon calculations must include carbon sequestration and end-of-life considerations which can be particularly challenging with some of these are unknowns at the time of construction.

Embodied Carbon Measurement
Back to top of page
This website and the SE 2050 Commitent Program is in beta and seeks your feedback and support! We plan to officially launch in November 2020. Please sign up for updates.